Hello again! I hope everyone had a really great Memorial Day and has a good week ahead. This week's font feature is Buena Park.

Named after a Southern California town in north Orange County, “Buena Park” was inspired by the hand lettered logo of a popular tourist attraction in that area. I adapted the letter designs—of which there were only 5 to start with—into a form that was workable as a full typeface.

Buena Park has some really interesting features to it that make it a unique design. At first glance it seems to be a typeface in the Clarendon tradition with heavy bracketed serifs and a distinctly late 19th Century feel to it.

Since the original five hand lettered glyphs conatined no ‘e’, I added and e with an angled crossbar which give the typeface some extra flair. Also, a number of the letterforms end with a small flourish like the c, e, and s

The font has the lower contrast between the thick and thin strokes, typical of a Clarendon style face. This makes Buena Park function well at a range of point sizes, although its primary intent is for use as a display face. 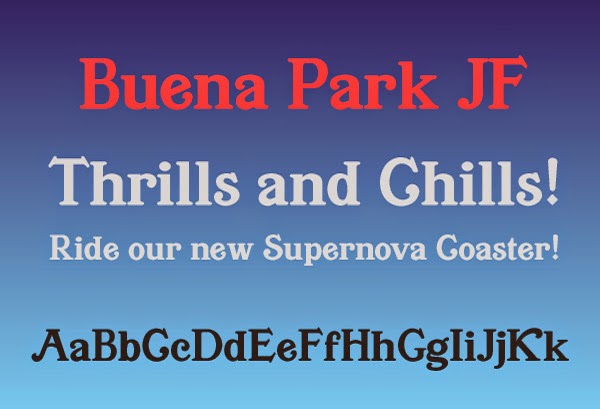 The curved crossbar on the H and the angled serifs on some of the capital letters, give the typeface a warm old fashioned feeling that makes it welcoming and comfortable. It has that “Barbershop Quartet” charm to it that makes it perfect for many applications.

This was one of my earlier fonts that was part of the original JAW Fonts library on MyFonts.com. Designed in 2001, Buena Park was a lot of fun to work on and I think that definitely comes through in the design.
Over the years, Buena Park had proved to be a popular seller for Jukebox. It was used in 2009 and 2010 for all the month names in Disneyland’s and Walt Disney World’s official wall calendars sold at the theme parks.

Font of the Week #17: Bronson Gothic

Good afternoon readers! It’s time again for the font of the week! Today we’ll take a look at one of the less well known Jukebox fonts: Bronson Gothic.

Bronson Gothic was designed in 2002 and is based on a hand-lettered alphabet I found in an old 1940s book on calligraphy and lettering design for advertising.

What drew me to the design of this typeface was the cool industrial look that the letters have. To me they seem to have an almost 1930s and 1940s feel that makes me think of Depression design and WWII era posters mixed with some Russian Constructivist design elements as well. Russian Constructivism was an art movement around that same time period. 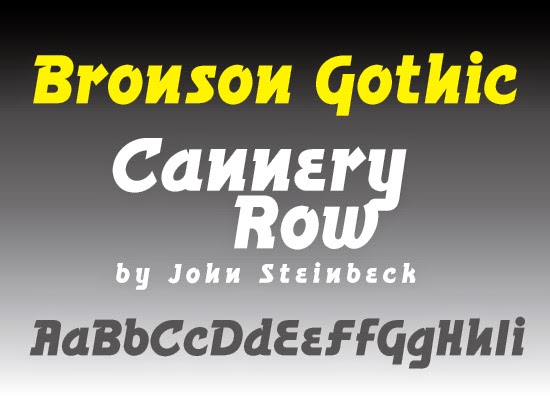 Some of the design details of this typeface are what I think makes it so unique. The lowercase ‘r’ is a good example…I like how the arm of the r is just a block rotated sideways rather than the typical curved stem. This plays well off of the curves of some of the other letters like the lowercase ‘w’ or ‘e’.

The notch in the lowercase ‘o’ is almost suggestive of a tube of metal bent around to form the letter. This gives the font a sturdy and masculine feel that is so reminiscent of the 1930s/1940s industrial design.

The font was named after a friend of mine who works in the investment business. It somehow seemed to fit with his practical and even-minded personality.

Bronson Gothic is part of the Jukebox library and is available from Veer.
Posted by Jason at 11:02 AM No comments:

Font Of The Week #16: Domani from CounterPoint

Hello! This week I thought we'd take a closer look at one fof the fonts from my newest CounterPoint font foundry…Domani CP

Domani is a digital revival of an old photo-typositing face called ITC Didi. The font was brought to my attention this past September by Washington DC based designer Rob King.

Rob King requested that I make a digital version of the Didi font, so this font began its life as smaller scale custom digitization. Once King’s version was complete, I further adapted the font for commercial sale as part of the CounterPoint font library.

The original ITC Didi was designed by Herb Lubalin and Tom Carnase. For some reason it didn’t make the transition to digital type in the 1990s. 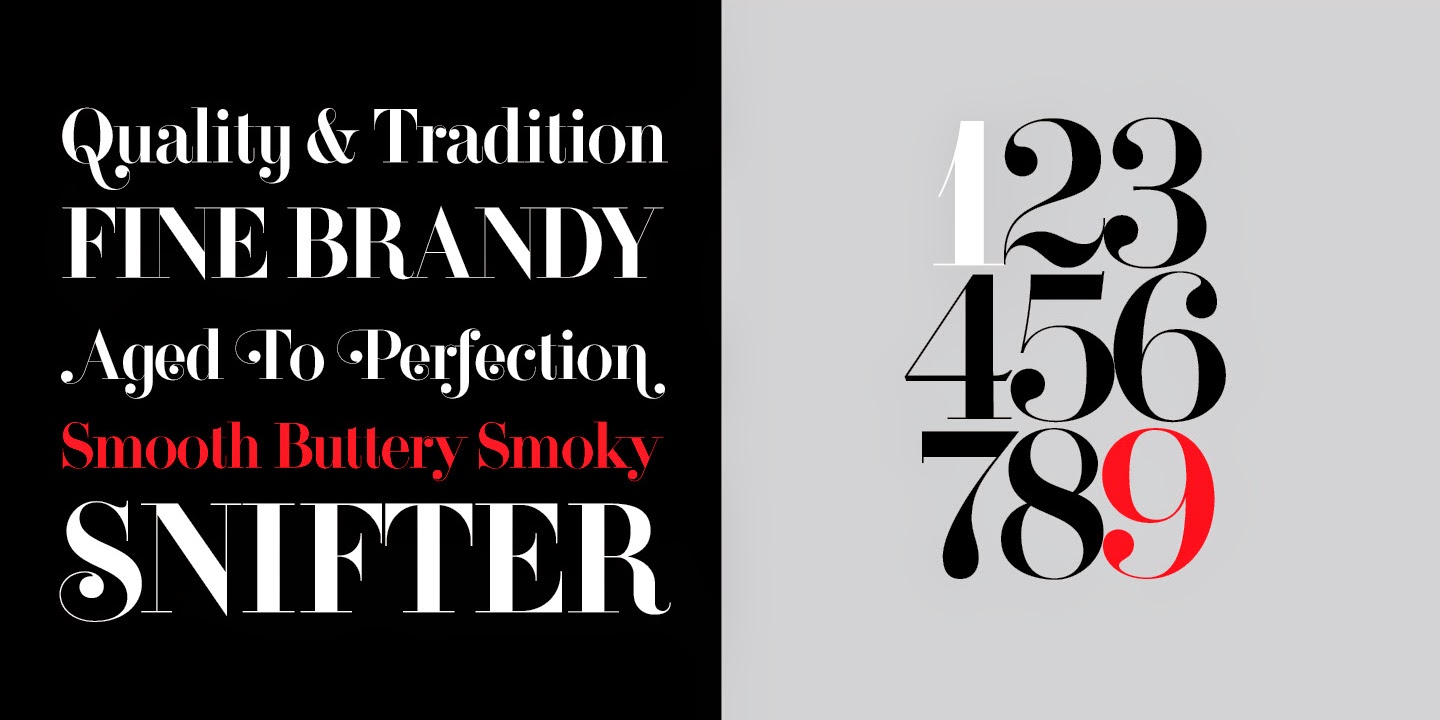 This font immediately captured me with its 1970s high contrast Didone style and large x-height…typical of ITC fonts from that time period. It has some unique design details that set it apart from other didone style typefaces. I worked on the digital version for a number of weeks and it was finally released for commercial sale in October of 2013.

Thanks in part to King who provided printed samples of the original Didi for me to work with, I believe I have created a version worthy of such genius type designers as Lubalin and Carnase. It is my hope that they would be proud and pleased with Domani.

“Domani” is the Italian word for “tomorrow”. The name was suggested by Rob King, and I felt it was perfect for this revitalized design. My professional quality digital version is both faithful to the original design while expanding the character set to make use of OpenType features.

I added a full set of swash capitals and several swash lowercase as well as support for Latin-based and Eastern European languages. Designing swash characters for a font is always fun because you can create so many different varieties! 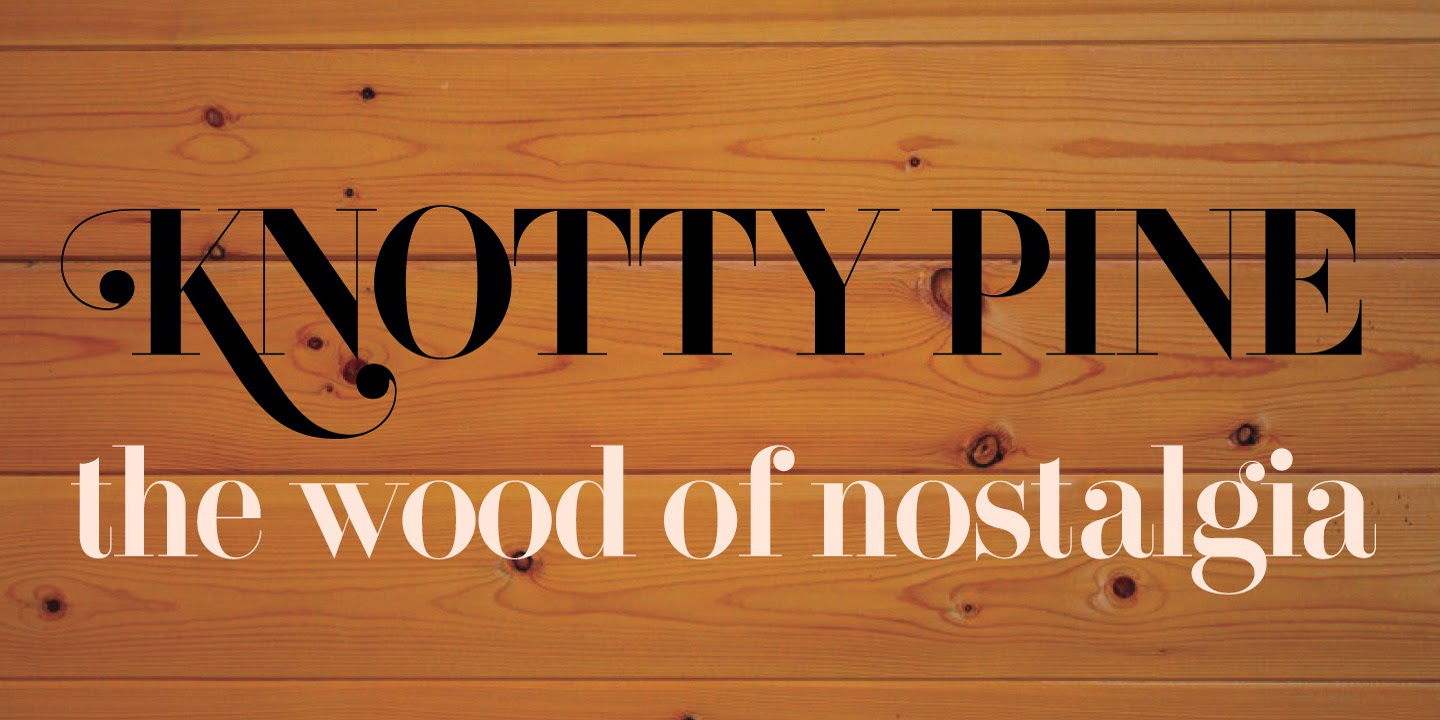 As part of the CounterPoint library, Domani is available directly from me or at several online font vendors including Monotype (Fonts.com), MyFonts.com, and FontHaus.

Font of the Week #15: Boxer Script

This font was inspired by the metal car lettering that is sometimes seen on older antique cars. Strongly reminiscent of the 1930s and 1940s automobile design, this font was a lot of fun to create! I wanted to capture that nostalgic feeling of Art Deco car culture.

Designed and released in 2002, I liked the idea of having the organic looking capital letters paired with the more “machined” design of the lower case. The connector line that runs between the lowercase letters mimics the design of words cut from a single piece of metal. 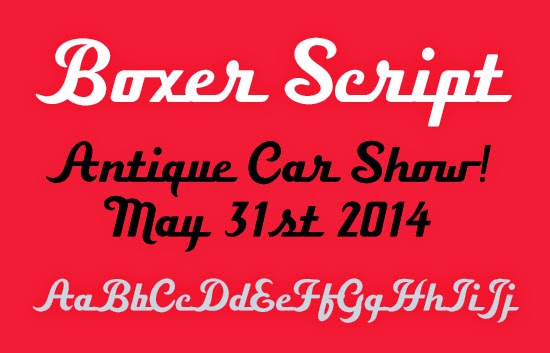 Several years ago I was contacted by company called Planet Granite in the Sacramento area who wished to use this font in their logo. The company owner used the font to create lettering for his antique vehicle.

The photo below shows the truck and it turned out absolutely beautiful! I was honored to have my typeface chosen for this purpose and it is the perfect car for the design. 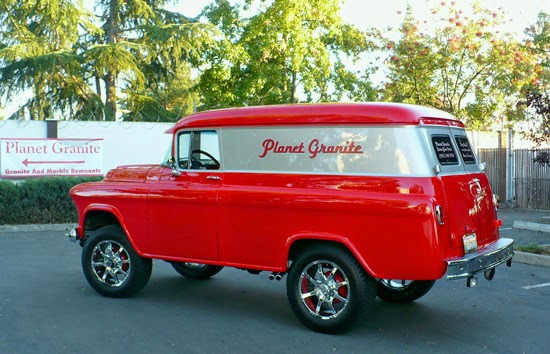 Boxer Script has also been recently used on several holiday candy products sold by Target stores during the Christmas season. It can be seen here in the word “Gourmet”. 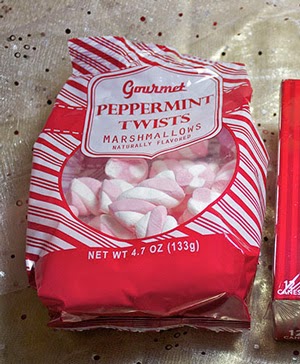 Boxer Script is part os the Jukebox library and is available from Veer.