Font of the Week #31: Dandelion

Hello again! It’s time for another Font of the Week. This time we are zooming back to the 1960s and early 1970s with Dandelion!

This font is a digital revival of an old photo-lettering typeface from the late 1960s. The sample I used to create Dandelion for Jukebox was found in an old Dover book. 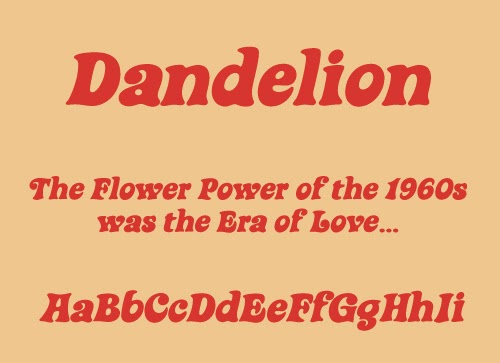 What I loved about this typeface was its 1960s and early 1970s feeling which reminded me of classic old TV shows, Kool-Aid and Jiffy Pop and all those fun things I remember as a kid that had fonts like these on them. The softer rounded forms of the lettering with its slight italic slant give the font a playful and innocent feeling.

The shapes of the letters flare out at the bottom suggestive of bell-bottom pants. Those were a popular fashion at the time of the late 1960s and early 1970s. Display fonts like these are always the most fun to design because they contain such vitality and life. When something connects in a personal way it always carries much more weight.

I also like the rounded bottoms that appear on some of the letterforms…like an overinflated tire which gives this typeface a cartoony and happy-go-lucky feeling. I can almost hear the letters giggling while riding on their Big Wheel.

I decided to name it Dandelion since the sunny yellow flowers always remind me of my childhood and innocent times when blowing on the dandelion seeds was the best thing in the world. 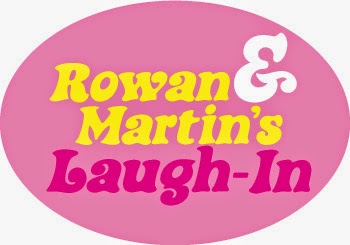 Dandelion was created in 2005 as part of the Jukebox library and is available from Veer. The font is now available in OpenType format.

Hello! Another fun Jukebox font sighting to report! I just receved this email advertisement from Lulu which is a print-on-demand company.

Here they are using Adage Script to promote their Oktoberfest sale. 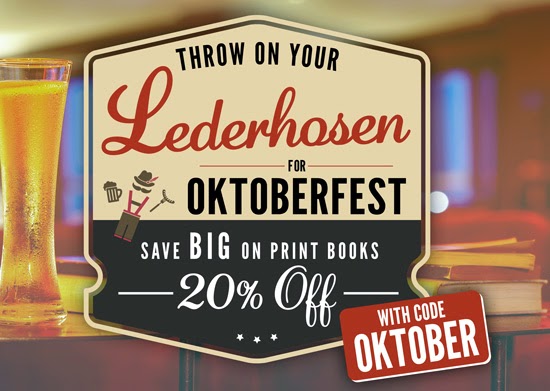 Adage Script can be purchased from Veer. If you are curious to learn more about this font, please read my previous blog post on the typeface. Enjoy!

Font of the Week #30: Cynthia June

Good morning and Happy Tuesday! Time again for a new Font of the Week. Today the featured font is Cynthia June, an elegant script typeface…

Cynthia June is an formal script typeface that falls into the font style category known as “Spencerian Script”. This refers to the Platt Rogers Spencer, the man who set this style of writing as the American standard in the 19th century. This style of script face is a direct extension of old fashioned quill pen writing and was considered to be a sign of refinement and class. You will also sometimes see this style referred to as Copperplate Script, since the original books that taught children to write this way, were printed from engraved copper plates. 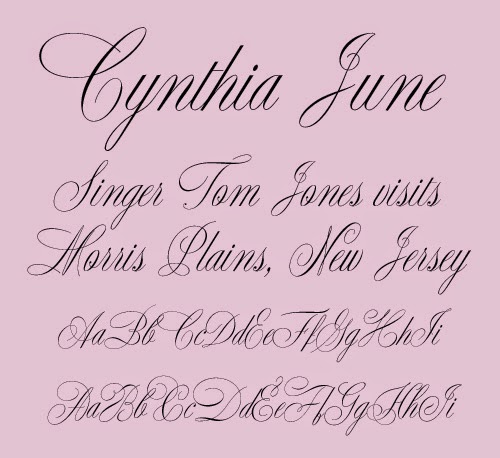 Designed in 2010, Cynthia June was inspired by a hand lettered alphabet found in an old 1930s book on lettering for the commercial arts, and was actually created from an amalgam of three different samples. There are two faces in the Cynthia June family, Cynthia June One and Two. The “Two” font has more elaborate capital letters with flowing swashes and looped acsenders on some of the lower-case letters.

I have always loved fonts like these because they invoke feelings of such elegance and refinement. I can always picture them being used on the invitation to a royal ball. These typefaces are of course perfect for just that purpose, and can be used on wedding invitations and other formal occasions. While all script fonts are by their nature warmer and more inviting, Spencerian script fonts are the most formal kind…They give the air of a formal party rather than a casual get together. 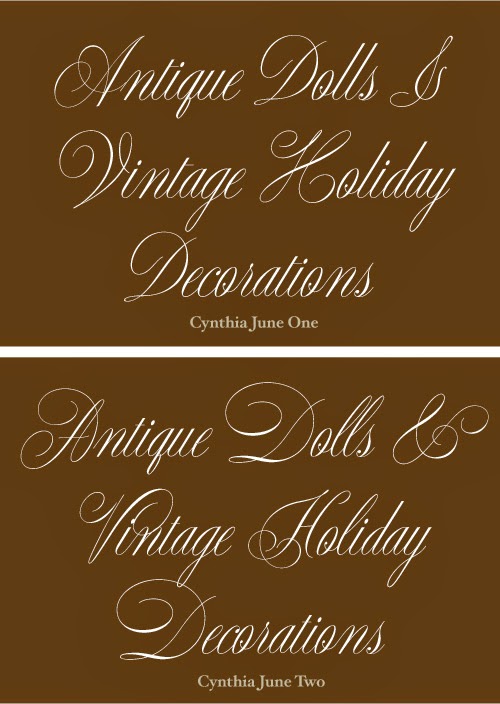 Cynthia June is named after a dear friend of mine who I met through the fun hobby of vintage Halloween collectibles. She is as classy and beautiful as the font, so she was the perfect namesake for this typeface.

Cynthia June is available from my website in OpenType format and is part of the Jukebox library.
Posted by Jason at 9:19 AM No comments:

Good day to you! I hope you had a nice Columbus Day holiday and a terrific weekend. This week’s font feature is “Cousin Beth”.

This is a fun and light hearted font that was inspired by a hand lettered album cover from the 1950s. While browsing in an antique store one day a few years ago, I ran across an old LP for sale of Hawaiian Music. The classic Mid-Century Modern cover had lettering which I used as the springboard to create my Cousin Beth font. 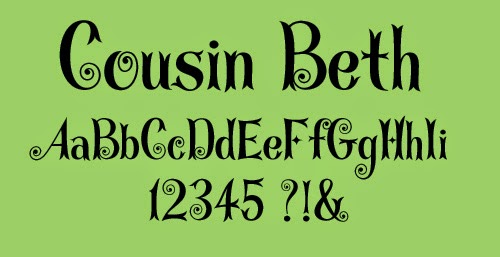 As with many of my Jukebox fonts, I named this one after someone who is special in my life. I have a real cousin on my mom’s side named Beth and being born only seven months apart we have always been close friends since we were small children.

When I choose to name a font after a real person, I always try to select a design that seems to fit with their personality. My cousin is feminine and sensitive, but fun, outspoken and has a fantastic sense of humor. The design of the “Cousin Beth” font seems to capture those same qualities. 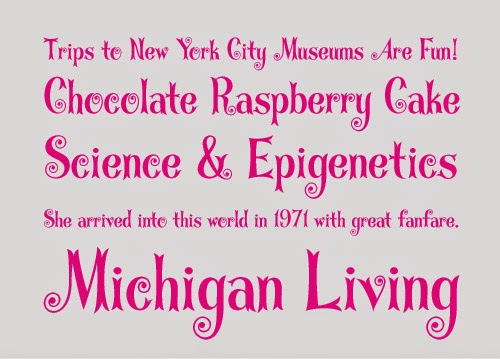 The design of this typeface has some unique elements to it. I like the curly stroke endings on some of the descenders and ascenders as well as the unusual diamond shaped crossbars on the F, H and capital O. The ending strokes on most of the letters split at the end and flare off in two points. This gives the font an organic feeling suggestive of plants and vines. This is especially apropos since my cousin works in the field of plant genetics.

I have seen this font in use a number of times out in the real world. Most notably on some promotional material from holiday folk artist Johanna Parker, but I also saw it once as far away as New Jersey, near where I grew up. While visiting there on vacation one summer I ran across a sign for corn at Sun High Orchards that used Cousin Beth as the font. It is also used by the Calico Cake Shop in Buena Park CA on some of their signs. 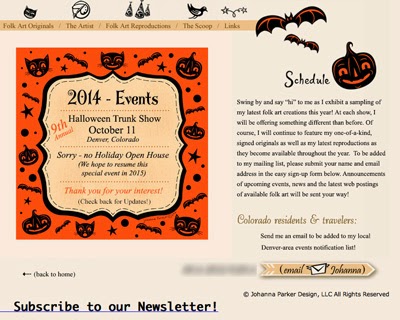 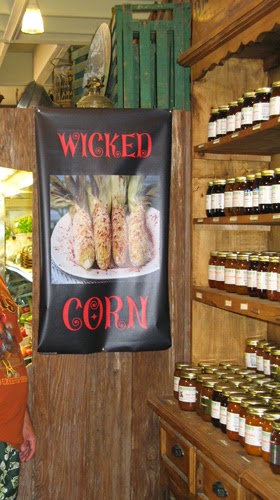 Cousin Beth is part of the Jukebox library and is available from Veer in OpenType format.

Font of the Week #28: Corner Store

Hello! I hope you’ve been having a nice Autumn so far. After a hiatus, I am resuming this blog and starting up again with the Font of the Week feature. This week’s font is “Corner Store”.

Inspired by a hand-lettered alphabet in a book on sign painting, this font is one of my favorites in the Jukebox library and has been a popular seller. I really  enjoyed creating this one. The design of the font seems to capture all those nostalgic hand-painted windows in old fashioned soda fountains. Hence the name Corner Store. 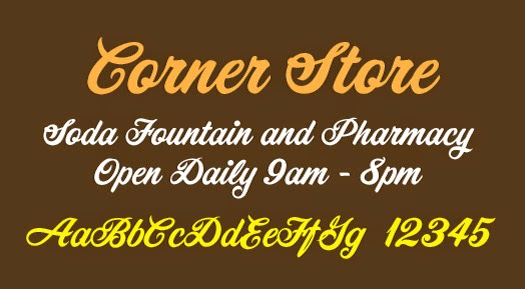 Corner Store has several alternate letters included which can add to the variety available for a more hand-lettered look. There are also four ligatures to insure a smooth flow between certain letters. In the newest updated version of the font, these can be substituted automatically with OpenType features.

There is an alternate lowercase “e”, shown below, that drops below the baseline. When substituted for the regular e, it lends a slightly different look to the font. This is particularly useful for large words or headline style type. I always enjoy creating typefaces that have some variety to them and allow the user to get the most design possibilities they can from it. 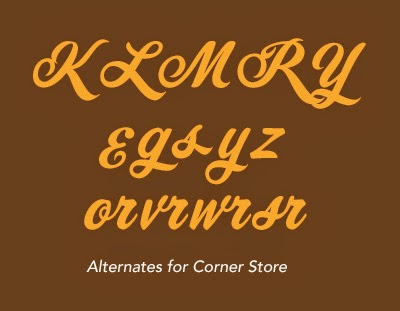 I have seen several fun and interesting uses of Corner Store out in the world. It is one of the Jukebox fonts licensed by VistaPrint and can be used via their website to create products. Recently it was used on Dean McDermott’s website, “The Gourmet Dad”. McDermott is husband to Tori Spelling and his website is devoted to his family and cooking with his kids. I discovered this use of the font last year when the website was shown on The Food Network.

Corner Store is part of the Jukebox library at Veer. It is now in available in OpenType format