Good morning to you! Today I'd like to take a closer look at one of my favorite digital revivals in the entire Jukebox library. The illustrious and much sought after Bookman family

BookmanJF or sometimes referred to as “Jukebox Bookman” is a digital revival of an old typeface that was huge in its day as a photo-lettering face but for some reason never quite made into the digital era until I brought it back to life as part of the Jukebox collection.

Consequently this typeface was often requested by designers in type forums online who were always disappointed to find out it didn’t really exist. There was an obscure digital version that was available for awhile, but the company that created it is long gone and the font was not carefully executed.

In September of 2005 I went to Calgary to meet with the creative team at Veer. I had been kicking around the idea of doing a digital revival of the original Bookman fonts (in all their swashy glory) for awhile and when I mentioned it, the guys jumped on it! We decided unanimously that I would create the version that today is Bookman JF. 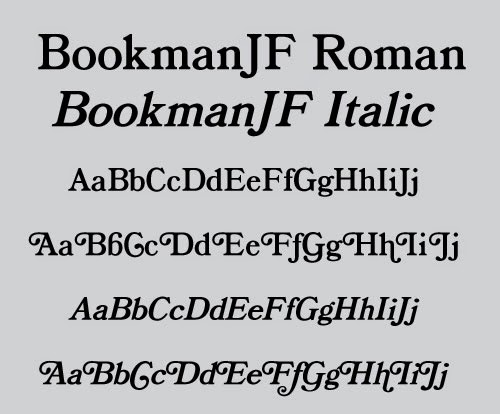 Bookman JF is a revival of a version of the Bookman family that was originally designed by Alexander C. Phemister and Chauncey H. Griffith in the early 20th century. This version contained a large selection of swash characters that was particularly unique, especially for the italic face.

These fonts became wildly popular in the 1960s and 1970s and were used extensively in advertising and signage. It is one of the earliest fonts I can remember falling in love with as a child in the mid-70s. Around that same time, Ed Benguiat designed a new version of the Bookman and Bookman Swash fonts for ITC that was intended to be an updated iteration of the original. That font is now known as ITC Bookman.

Benguiat’s version is beautiful in its own right, but ended up being quite different from the Phemster/Griffith version and ultimately should be thought of as an entirely different design with its own feel. When type started going to digital in the early 1990s, it was Benguiat’s ITC version that made the transition and somehow the original was neglected.

That was why I was so eager to create the Jukebox Bookman which is a true and faithful revivial of the original fonts.

Both the Roman and Italic versions contain a set of numerous alternate swash characters making the fonts quite versatile. The Italic face in particular sports the one-of-a-kind and instantly recognizable “Th” ligature which is so expertly designed. You can see it in the sample below. 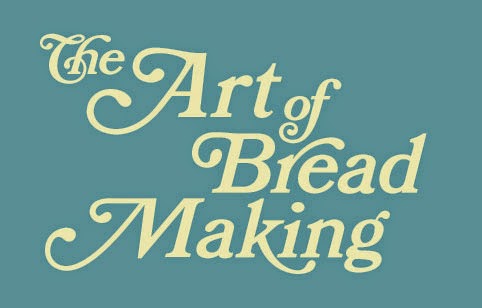 The original Roman version didn’t contain as many swashes as the italic face, so this is where I gave the Jukebox version its own twist. With the many glyphs available to OpenType fonts, I was able to add some more swashes to the Roman version and fill it out a bit. 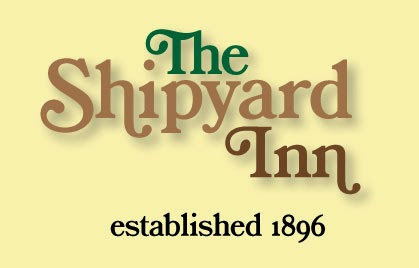 The Jukebox version has gone through a couple of updates over the years to add OpenType and Eastern European language support and is now available as a Pro package from Veer.
Posted by Jason at 10:34 AM No comments:

Greetings all! I hope your weekend was great and that any holiday celebration you may have had were good too.

This week’s Font of the Week is Block Party!

Block Party was created in 2005 and is a digital revival of an old photo-typositing face found in an old typeface catalog. The font has a fun and child-like feel to it with it’s large chunky forms and uneven shapes. Looking at the font, you definitely get the feeling that some enthusiastic person could have cut these letters out of construction paper. Fonts like this are fun to design, but often require lots of extra kerning, which is the adjustment of spacing between individual letters.

The name just seemed to jump up at me from the design. I like the way some of the letters have missing counter spaces, like on the P and B. Block Party is an All Caps font, which lends a bit of a different feeling to a typeface. They are much better for headlines and attention grabbing text.

Block Party is part of the Jukebox library and is available exclusively from Veer.

Font of the Week #12: Beignet Regular and Heavy

Hello! It's time for the Font of the Week again. Usually I post these on Tuesdays, but yesterday I out of the office and busy with a current project.

This week’s font in the hot seat is “Beignet”, which has both a Regular and Heavy weight. The font was inspired by a hand-lettered alphabet in an old 1930s book on lettering for advertising, which I expanded and developed into the two complete weights.

My favorite part about this typeface is the cool 1930s art deco design to the letterforms. They are at the same time somehow both calligraphic and machined. The design made me think of jazz and speak-easies which prompted me to give it the name Beignet…the traditional French Quarter fried donuts from New Orleans.

The font is available in both a Regular weight and a Heavy weight offering some good variation with intermixing. The fonts can be used in both a mixture of upper and lowercase, or as an all caps font. Each way gives a slightly different feel while staying perfectly integrated as far as form and design. I always love to make my typeface designs as versatile as possible. 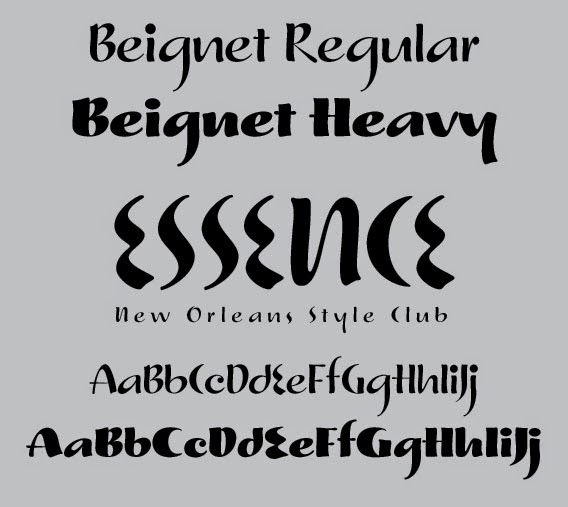 Both weights of the fonts contain an alternate version of the capital E which is in the “ \ ” key position.

Beignet was designed in 2009 and is part of the Jukebox library sold exclusively through Veer.

Font of the Week #11: Baroque Text

Good morning! In this week’s ‘Font of the Week’ feature, we will take a closer look at Baroque Text…one of the more popular fonts in the Jukebox library.

Baroque Text was created over a long period of time. It took me just shy of a year to complete the font starting in Summer of 2001. Upon completion in late Spring of 2002, the font was released for commercial sale at MyFonts.com and eventually became part of the Jukebox library in 2003.

The font was inspired by a hand lettered typeface in a “how to” manual on calligraphy and pen lettering from the 1950s. 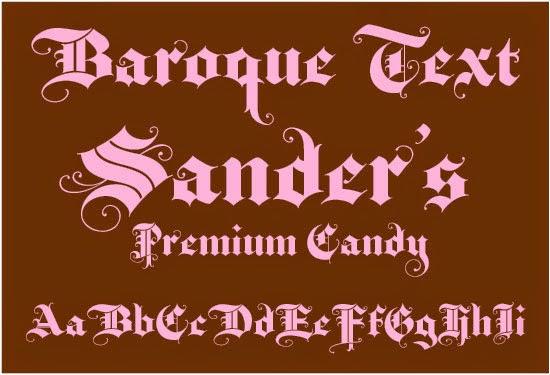 Baroque Text is a sample of what’s known as a “Blackletter” font. Blackletter is a style of typeface that includes what we think of as “Old English” or sometimes mistakenly called Gothic, which actually has a different meaning in typography. The correct term for these kinds of fonts is Blackletter, and they often carry the term “text” in their name. They originally started in the abbeys where monks would write and illuminate manuscripts by hand. When Gutenberg’s movable type printing press came along in 1439, the first metal type was still done in this style to keep with tradition.

Because Blackletter type grew out of a tradition of handlettering, it is easy to see that the forms of the letters reflect their calligraphic origin. The thick and thin strokes are the types of marks that would be made by an angled calligraphy pen.

While keeping with this tradition, Baroque Text is much more of a fanciful display face than a font meant for setting long text passages. The elaborate forms and curlycues of the letters was what prompted me to call the font Baroque Text.

Because of the long standing association of Blackletter fonts with fairy tales, holidays and mysterious long-ago times, this font has been a very popular one for those type of applications. Disneyland has used Baroque Text on quite a few of its theme park merchandise, shirts and hats…particularly related to the princesses of the Disney canon. 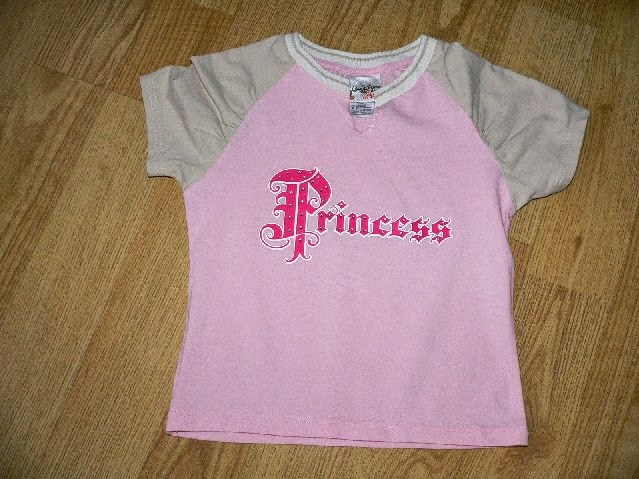 Baroque Text is part of the Jukebox Library available exclusively from Veer. It is now available in OpenType .ttf and .otf formats.

Font of the Week #10: Baileywick Gothic

Good afternoon to everyone! I hope you’ve had a great week so far and I also wish you a Happy April! It’s time again for the font of the week. This week we will take a closer look at the third typeface in the Baileywick family called “Baileywick Gothic”.

Since the other two fonts in the Baileywick family were relatively fanciful, I wanted to create a sans-serif companion to those faces that was more versatile and low-key but still retained some childlike fun. I also wanted to make sure I kept it within the whimsical style that was so indicative of Mary Blair's work. The font is partially based on a hand lettered slogan for a 1950s cigarette advertisement that Blair created the illustrations for. The font was designed in 2002 along with the other typefaces in the Baileywick set.

Creating this font was a lot of fun because I knew it could stand alone on its own or be used in tandem with either of the other two fonts from the Baileywick family. A sans serif font is generally much more clean in its form and pared down to the basic letterforms.

Starting with more standard letterforms, I added the whimsy and slight off-beat feel by tapering the vertical strokes in the centers, and giving them different lengths. I also added a slight modulation to the baseline which gives the typeface a more casual, “bouncy” feel. 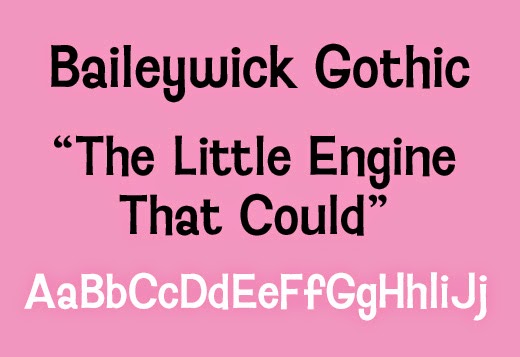 Because of these subtle changes in design from a formal sans serif face, Baileywick Gothic has a hand drawn feeling to it, which helps it feel homey and welcoming.

Baileywick Gothic has been a strong seller for Jukebox and has been used on many products and commercial applications. One of my favorites was for the title screen for the “Jim O’Conner Road Show” which was a segment that was part of The Secret Life Of… which aired on the Food Network from 2004-2007. The show would explore various aspects of America’ favorite foods. 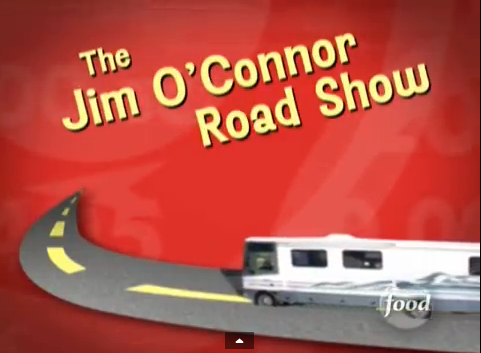 Baileywick Gothic is part of the Jukebox library and can be purchased from Veer.