Font of the Week Feature

Good morning All! As we start the new year in 2014, I have decided to begin a new feature on this blog. Each week on Tuesdays I will post a "Font of the Week", from either my Jukebox or CounterPoint font libraries. Each post will contain an image as well as a history behind the making of the font and how it came to be. It will  be a fun way to share with everyone what goes on in my head when I sit down in front of my computer and launch FontLab. Enjoy!

Acroterion is a “Spencerian” script font, also sometimes referred to as “Copperplate”. This comes from the old days when lettering like this would be etched into a copper plate for printing. This style rose out of the handwriting of the 18th and 19th centuries and eventually became associated with elegance and refinement, as it was the handwriting of the upper class and well-educated in early America.

The thick and thin strokes are suggestive of the quill of a pen which naturally changes thickness as one writes. Of course, fonts like Acroterion have been morphed into a standard and “idealized” design. 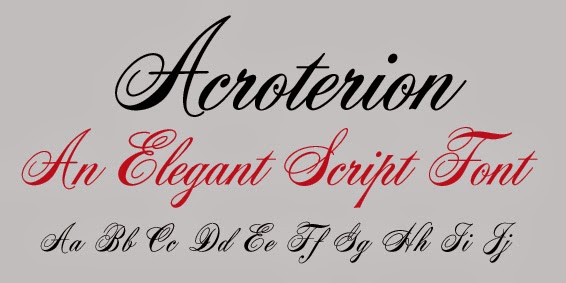 Part of the Jukebox library, Acroterion is a digital revival of an old photo lettering typeface. That means that I carefully traced each letter from an old type sample book and adapted it to serve as a digital font for today’s era. Creating digital revivals as well as original designs is a great way to not only round out a library, but also keep old typefaces alive since photo lettering has gone the way of the Dodo. Photo lettering was an old method of adding type to print designs that essentially had each letter in the font on a film strip. That could then be used to expose the letters in the correct order onto the photo plate before adding it to the design.

The name “Acroterion” is a term taken from ancient Greek or Roman architecture. An acroterion is a sculptural element shaped like a leaf or a gryphon and placed at the corners of the roofs of buildings and temples.