Font of the Week #9: Baileywick Festive

Happy Tuesday everyone! This week we will take a look at another member from the Baileywick Family called “Baileywick Festive”.

Baileywick Festive is from the Jukebox collection and is one of four fonts designed as a set that pays tribute to the art of Mary Blair. Blair was known for her childrens book illustrations, advertisements and most notably, her design work for Disney films and theme parks.

Baileywick Festive was inspired by hand lettering from the “it’s a small world” attraction at Disneyland, which was largely designed by Blair. Her unique color styling and use of shape is what gives the ride its special look. Designed in 2001, Baileywick Festive was originally sold at MyFonts.com before becoming part of the Jukebox library at Veer in 2003. 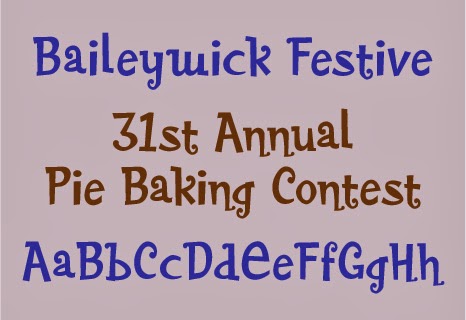 A fun and playful font, Baileywick Festive is perfect for any design that needs a whimsical feeling. It is sweet and childlike without being saccharine or cutesy.

The font contains a few extra ligatures for double letters. This can help keep the design fresh and give it a more hand-lettered feel.

Designing display fonts like this is always a lot of fun because I am able to be more free with the letterforms. Formal text or serif fonts require extensive and meticulous refining and spacing. Typefaces like Baileywick Festive, give font designers like me a chance to play!

Font of the Week #8: Baileywick Curly

Hello and good morning everyone! I hope you had a Happy St. Patrick’s Day yesterday. It’s time again for the font of the week and this week it is Baileywick Curly…

The four fonts were in part inspired not only by Blair’s art and illustration for books and advertising, but also her designs and inspirational art for the “it’s a small world” attraction at Disneyland. Blair had a very unique style to her work that is easily recognizable in her use of shape and color.

Walt Disney was quite taken with her and over the years she did many sketches and studies that influenced not only the animated features, but the theme parks as well. “it’s a small world” is probably the most recognizable in that it was nearly all Mary Blair’s design and the attraction in a sense really is a Mary Blair art piece.

I admired her work greatly and so the Baileywick font family honors that. The Curly variant is a fun and happy–go–lucky typeface that is whimsical and childlike. Consequently, it has been a popular seller for Jukebox and I have seen it used on many products over the years. It seems to lend itself to a lot of holiday themes and I've seen it used on many examples of Christmas and Halloween merchandise. 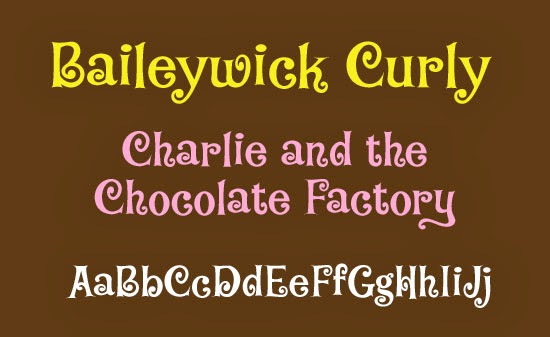 When I designed this typeface, the old PostScript® format was still the standard for type, limiting the number of characters I could put in the font. However, there are a few alternates added to this font which people may not be aware of. They are shown below…

Baileywick Curly has been used on too many products to show in one blog post, but a few are shown below. A Halloween banner made for and sold by Target in 2009 and more recently, tags on the Disney Babies merchandise sold at the Disney theme parks. But, the absolute coolest and possibly most awesome use of one of my fonts ever, was that Baileywick Curly was used in the set decoration and signage in the feature film “The Santa Clause 3” starring Tim Allen and Martin Short. To have my work preserved forever on film this way is a true honor. 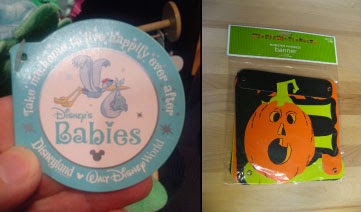 Baileywick Curly is part of the Jukebox font library and is now available in OpenType format exclusively from Veer.

Font of the Week #7: Annabelle

Hello to my readers! I have had a busy week so the Font of the Week is going up on Wednesday instead of Tuesday. This week we will take a look at “Annabelle”.

Annabelle is an original font that is part of the Jukebox library. The design was inspired in part by an old greeting card. This font is the first we have looked at that is named after a real person who is special in my life. In this case my mother:

My mother’s name is actually Ann, but my dad used to call her ‘Annabelle’ as an endearment. Back when this font was designed in 2002, I was working in the old PostScript format and font names had to be a certain number of characters in length. The name Ann was too short and Annabelle seemed a more appropriate name for the design. The font was completed that same year and originally was available as part of my first foundry at MyFonts.com. 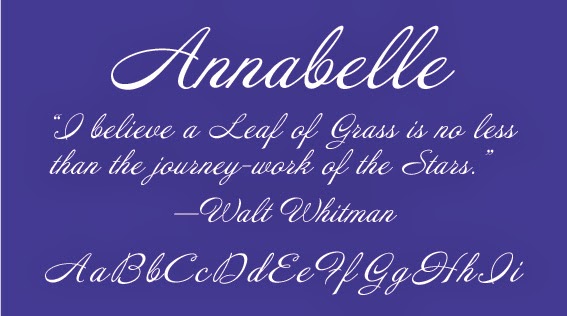 Annabelle is a flowing script font that is Spencerian in its major design elements yet has a warm playfulness to it that prevents it from being overly formal. The long loopy strokes and somewhat wider letterspacing than is typical for a script font, gives it a very feminine feel.

My mother taught high school English and American Literature for many years and Walt Whitman was one of her favorite authors. The above quote from him resonates with me not only for relating to my mom, whom the font is named after, but in awe of how right he was about the nature of existence.

In the decades to come after Whitman lived, scientists indeed discovered that all the necessary chemical elements that make up life on Earth were formed in the cores of stars and returned to space when those stars exploded as supernovae. As Carl Sagan said, “We are made of star stuff”.

Annabelle has proven to be one of the more popular fonts in the Jukebox library and has enjoyed use on many commercial products and even on television. My personal favorite use of the typeface was on the cover of photographer Anne Geddes’ autobiographical book entitled “A Labor of Love”. 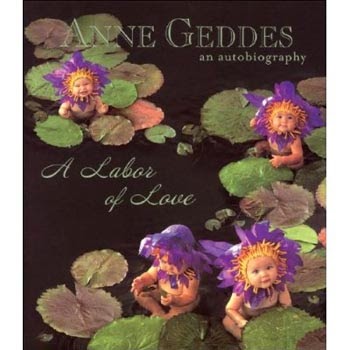 Font Of The Week #6: Andantino

I hope everyone is having a great week and enjoyed the Oscars this past Sunday! It's time again for my font of the week. This week we will take a look at Andantino…

Andantino is a script font from the Jukebox library and it is a digital revival of an old photo-typositing face called “Adagio”. The original was designed in 1953 by Karl Klauss for Geuzsch & Heyse. The font never made it into the digital era, so I finally did that for Jukebox in 2003.

The name Andantino like Adagio, is a musical term. Andantino is an Italian word that refers to a medium-slow tempo at which the music should be performed. I have often found many parallels between music and fonts given the variety and combinations which 26 letters or 12 notes can create. That is one of the reasons I felt that musical terms were perfect for both of my foundry names: Jukebox and CounterPoint. 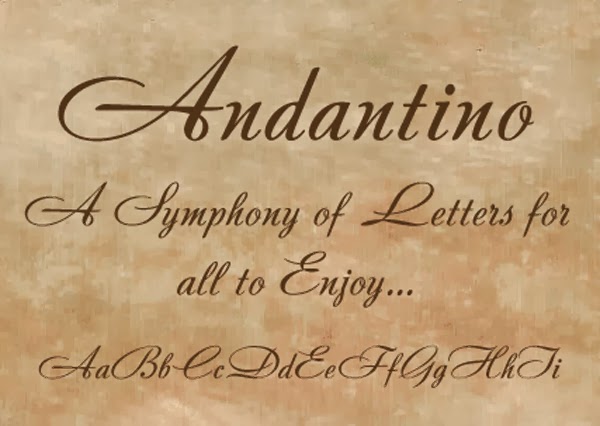 Andantino has a classy and refined feeling to it, and yet is approachable as well. It seems to be the perfect font for wedding invitations or semi-formal events. As a script font it has the interesting design element of non-connecting lower case letters which is part of why it has a more upscale feeling. The one-step-removed from true script writing bridges the gap between a handwritten font and a purely designed print face.

A notable use of Andantino is on the cover of Debbie Macomber's Book “Home for the Holidays”.