I am excited to announce a new font from CounterPoint called “Domani”. Domani is a faithful digital revival of an old photo-typositing face called ITC Didi. The original Didi font was designed by Herb Lubalin and Tom Carnase.

I had a lot of fun bringing this font back to life! Up until two months ago I was unaware of the typeface, until it was brought to my attention by Washington DC based designer Rob King. He suggested that it would make a great digital revival and I agreed! I updated the design to include OpenType features as well and adding swash characters. Rob King suggested the name Domani which is the Italian word for ‘tomorrow’. I thought it was perfect for the revitalization of this great typeface! Domani is a didone style font with heavy contrast between the thick and thin strokes.

Domani is available as an OpenType font in both .ttf and .otf formats. You can get it directly from me or from MyFonts.com. It will also soon be available from Veer.com, Fonts.com, Fontdeck.com and FontHaus.com. 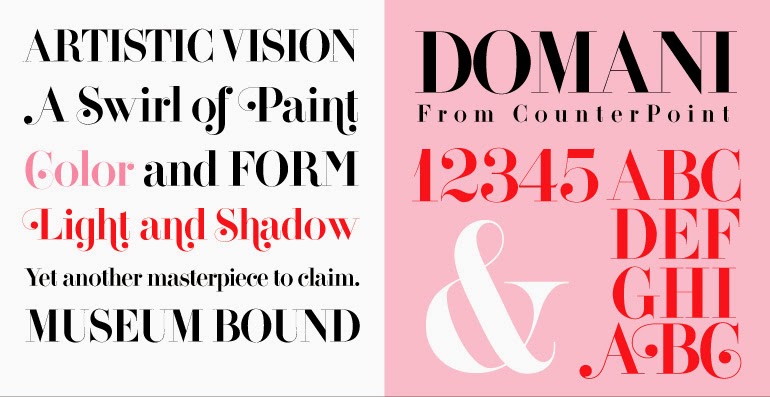 New Walcott Design.com up and running!

Hello everyone! First of all I'd like to thank everyone who has followed JAWarts.com over the years. I have now moved my website to the new WalcottDesign.com. I think that's a much better URL for my business. The website has also been updated and revamped a bit.

I will also now be posting on this blog regularly with updates on new fonts from CounterPoint, as well as a “font of the week” feature and other fun and interesting posts. Be sure to subscribe so you don't miss anything! Good evening to all…

Jason
Posted by Jason at 7:46 PM No comments: